Jeffrey Joe is living out a childhood dream and a passion for radio developed at a very young age. When he was a kid, he created “radio programs” on a portable cassette recorder and “never grew out of it”, he says. “As soon as I found out you could get a paycheck for talking on the radio…I was in!” Jeffrey Joe got his start in the radio business in late 1980 and has been known under different names and aliases on the air since. Working on radio stations, mostly in Southern West Virginia. Music is a big part of his life too. “I like music from many genres; rock, country, gospel, blues, folk, indie, jazz, bluegrass, and others…music and radio have always gone hand in hand for me.”  Jeffrey Joe is also a musician and singer-songwriter and has performed at different venues around the appalachan region, including Theatre West Virginia, Tamarack and Public Radio’s “Mountain Stage”. He’s also released cd’s of his music. “Radio and music are a big part of my life and I thank the Lord for both.” Check out Jeffrey Joe weekday afternoons from 2 ’til 7 . 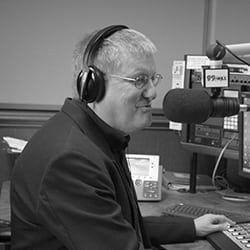